Val Kunimoto wishes Wellspring had been available online a few years ago when she was in the darkest days of her struggle with leukemia.

But the Lethbridge resident who is now gratefully enjoying a second remission, isn’t the type to sit around and lament, she’s on a mission to ensure others living with cancer in her area find the connection and support of Wellspring.

“Wellspring is just the best thing for anyone going through cancer. We are so lucky to have it available no matter where we live,” said Val.

Cancer in the Rearview Mirror

It was 2015 when Val was diagnosed with leukemia, and at that time, treatment was not offered in Lethbridge, so she and her husband had to leave their home and spend five months in Edmonton. Val was admitted to the University of Alberta Hospital for a full month of very intensive in-patient chemo, administered 24/7. Luckily, they had two daughters in the city who could help with support and a place to live. Three more months of grueling outpatient chemo treatments followed.

“It was a very intense and frightening time with only a 35 percent chance of survival. I got through it with a lot of help from my family and my dedicated Restorative Yoga and Yoga Nidra practices,” she said.

Somehow, Val managed to defy the odds, and make it to remission. Sadly, the victory was short-lived, as, one year later; in November 2016 the cancer was back.

This time Val received the most potent chemo there is, following the same protocol as the first time in Edmonton, as well as full body radiation, before being transferred to Calgary for a bone marrow transplant. The process was long and grueling. Between treatment, recovery and the precarious period of waiting to rule out the potential of rejection, she and her husband endured impossible stress while living away from home – this time for six months.

Once again deeply grateful to hear the word ‘remission,’ Val began the long road to healing – first her body, then the emotional trauma of all she lived through.

In the fall of 2020, with the physical effects of cancer behind her, Val found herself dealing with the lingering emotional side effects of living through life-threatening cancer and recovery – twice, with the ongoing fear of a recurrence or bone marrow rejection. To add to the stress, dealing with months of uncertainty with the Covid pandemic triggered a lot of anxiety. A long time yoga friend told her she was teaching yoga online for Wellspring Calgary, so Val immediately joined. The emotional support they offered was incredible,” she said. “I joined four programs (Yoga, Breath Relaxation, QiGong and Yoga Nidra), and they were so amazing, so stabilizing, so calming, so everything! I just kind of dropped into this beautiful place with other people who knew what I was going through.”

Every week Val looked forward to connecting with her online Wellspring community, and finding the comfort and support she needed to deal with the emotional fallout of cancer.

Going forward, Val takes life one healthy step at a time, with hopes she can make a difference in the lives of others going through cancer by spreading the word in her community that Wellspring is there to support them. “What Wellspring did for me was just wring out the stress, the worry and all the tension. I want to share this with as many people as I can so they know they are not in this struggle alone,” she said.

Early in 2021, Val responded to a call out to those living in southern Alberta, to join a conversation and play a role in helping promote Wellspring’s expansion into the southern areas of the province. During this session, she connected with two others with a cancer experience who were also living in Lethbridge, and the three of them began meeting twice a month for a walk around Henderson Lake in Lethbridge.

Fondly labeled the ‘Lethbridge Go-Getters’ by Wellspring’s Southern Alberta Lead, Rebecca Perkins, this group continued to meet and support each other, and today there are up to 10 individuals in Lethbridge attending these walks or coffee visits twice a month.

Next, Val made an enthusiastic leap into a more formal Wellspring ambassador role when the call went out for Wellspring Southern Alberta Community Connectors. 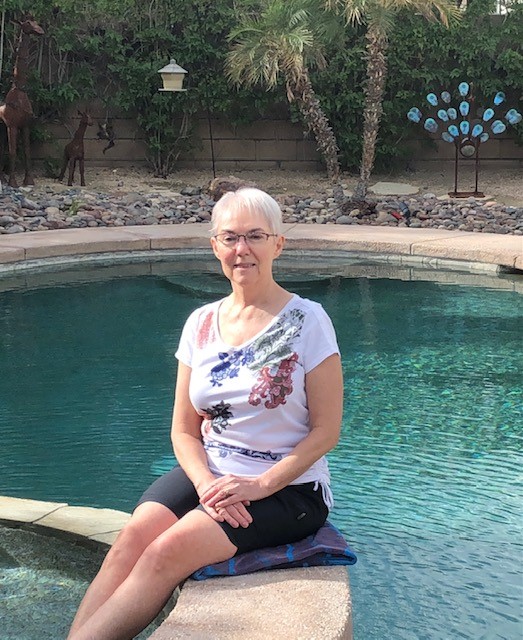 Val was one of the first cancer survivors living outside of Calgary city limits to sign up and take the training for a volunteer role as a Wellspring Southern Alberta Community Connector. In this vital role, she and others who have also signed up, help build connections and relationships with those living with cancer in their own local communities in southern Alberta. This paves the way for Wellspring and its highly prized Community Connectors, to offer programs and to support to those individuals and their families both online, and eventually in person at local facilities.

“Being a Southern Alberta Community Connector has been such a rewarding experience for me. I am now part of an organization that is providing essential support for those experiencing cancer in my community!” she said.

“The emotional fallout after cancer was very difficult for me. It was a long process of trying to sort out all the emotions from those hard cancer experiences. During treatment, I couldn’t really let myself go there – all my energy had to go toward staying alive. When I found Wellspring, I was like a sponge, taking in all the goodwill, kindness and self-love to nurture and heal myself.” – Val Kunimoto