Bev Watson has made a life mission out of defying odds.

She defied the odds in the early 80s when she opened a water store, though several banks refused her financing on the grounds that no one would buy bottled water when it flows freely from the tap.

She defied the odds when she earned her private pilot’s license and, with the profits from her ‘hardly plausible’ water business, started three outdoor clothing and gear shops, and bought a small plane to fly herself to her stores, and to remote sports training venues.

She defied the odds in 2013 when she won the World Championship Ironman in Kona Hawaii, setting a new course record for her age group that still stands today.

She defied the odds in 2015 when she was diagnosed with metastatic melanoma and though she was told the average survival rate is nine months, she underwent treatment, then got back on her bike and invited her sister on a cycling tour through France.

Today Bev Watson is still defying the odds – odds against losing her sense of humour and giving up, though she can no longer run, swim, cycle, ski, jump out of a plane, fly a plane, or outwit narrow-minded bankers.

“What can I say, I’ve been very competitive and a little contrary all my life, but that stuff has served me well,” said Bev, in a July 2017 interview. “My mantras are: Anything is possible, deal with it, and, if you can do it – I can do it!”

“To win a competition takes 1000 per cent effort … everything you’ve got times 10,” said Bev. And she would know, having won multiple world championships. 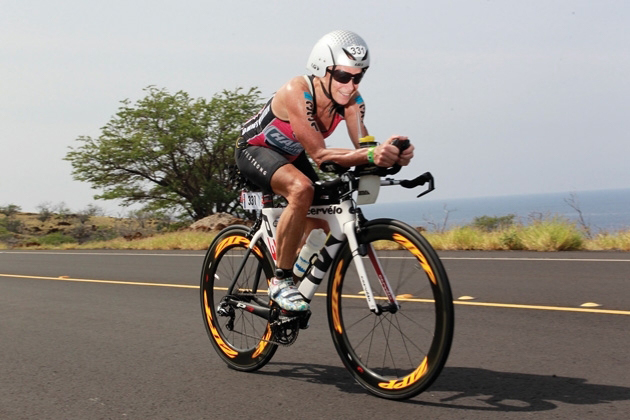 A Chartered Accountant by trade, Bev dislikes taking direction from others and is more aptly titled, extreme trailblazer. She has competed in 38 world championships in four different sports, including triathlon, skydiving (over 4,000 jumps), para-skiing (a two-part sport that combines skydiving with giant-slalom ski racing) and Spartan Racing (a grueling obstacle course race). She has also run The Canadian Death Race (125 kms) and climbed the highest mountain in the Americas (Mount Aconcagua in Argentina). There’s more but these are the highlights.

In 2015, while training for her next Ironman, Bev noticed she was lagging behind her normal top performance training times, and though numerous doctors’ visits didn’t confirm, she knew something was wrong. Months later when she was uncharacteristically fatigued and losing her balance, it was her dermatologist who first uttered the words … brain tumour? In fact it was … malignant and a doozie. The diagnosis was grim – metastatic melanoma. Brain surgery and vigorous treatment ensued. The prognosis: palliative. But Bev, extreme trailblazer, was not done. Not by a long stretch.

Bev’s older sister Jan has been a steadfast friend and ardent supporter of Bev throughout decades of rigorous training, grueling competitions and impossible feats.

“I was always flying here and there – showing up to cheer her on,” said Jan. “It’s been a real highlight of my life, witnessing Bev win over and over. She’s always had incredible spirit, strength and stamina.”

When Bev was diagnosed with cancer, Jan left behind her life and family in Toronto to take up residence at Bev’s home in Priddis and take on the full-time role of caregiver for her sister.

“She showed up like an angel right after my first surgery two years ago. Basically, she’s never left,” said Bev.

When the discussion turns to the insufferable days and nights of critical care, exhaustive appointments, and other relentless and taxing cancer moments, the pair steer away from the negative aspects and instead tell stories that bring them both to full blown belly laughter. At one point Jan jumps up to demonstrate Bev’s habit of sporting an ice cream bucket in place of a purse – a clever measure to accommodate incessant barfing.

When Bev learned that the expected survival for her illness is nine months, Jan accompanied her on several adventurous holidays, determined to help her reach a few more zealous goals while she could.

When Bev and Jan discovered Wellspring Calgary, both became members, adding to their already rigorous daily schedule of loading up the wheelchair, packing meds and snacks, and driving from Priddis to Calgary.

Last fall, when end of life seemed even more imminent, Jan helped her disperse her belongings and bequeath funds and prize possessions to family, friends and even some strangers in the sporting world.

Today, Bev and Jan soldier on, giving their 1000 per cent and tackling each new health obstacle like the champions that they both are.

“I’ve always said if you do things wholeheartedly then you’ll get the success you want,” said Bev. “Just do that, and never give up, and you really can’t lose. You’re winning all the way.”

Bev visits Wellspring Calgary several times a week, eager to sample new things that interest and challenge her, and determined to escape the all-consuming focus of cancer in her life.

“I’ve always been interested in art and music but I never had time – I was always working, running businesses and training 30 hours a week. At Wellspring I signed up for art and I loved it, I did four paintings that I’m really proud of.”

Accompanied by her sister and caregiver, Jan, Bev has also participated in Wellspring’s Healing Journey, yoga, Tuesday Tea, and Ukulele.

“I love playing and singing Campfire Songs on Fridays. I love that I’m sitting there strumming and thinking about nothing but getting the right chord – it takes your mind to a calm place. It’s an escape from all that crap going on in your life,” she said.

“The thing about Wellspring is everyone one is welcome. It doesn’t matter how bad you are at painting, or singing, or playing ukulele, you are always encouraged. You always know you’re fine there.”

BACK TO ALL MEMBER STORIES
Anika Haroon