Matt Frank has been transformed by thirst.

He was thirsty for exhilaration – an ambitious and high-performing athlete in his youth.

He was thirsty for knowledge – entering university with a goal and a promising future.

He was thirsty for water – an unquenchable thirst that struck suddenly at age 20 – a symptom of a noxious brain tumor squeezing his pituitary gland.

And then … the transformation.

Today Matt is still thirsty, but his thirst is for grace. It’s a quest for connection; a desire to be a light in the world for those who are suffering.

Matt grew up in Medicine Hat, the only child of caring, passionate parents who taught him to be adventurous, do his best, and love the outdoors. As a teenager Matt was a self-proclaimed introvert, but that didn’t stop him from pushing the limits and reaching great heights. He was an avid hiker, climber, and canoer. He played guitar and competed nationally and abroad on the Canadian Whitewater Kayaking Team.

In university, kinesiology was a fit for Matt. He recalls being perplexed when looking across the campus during orientation week and observing male students enrolled in the nursing program. He didn’t recognize the foreshadowing.

In his third year of study, while out for a run, Matt became impossibly thirsty. It was a crippling thirst… insatiable. This marked the beginning of the transformation from old Matt to new Matt.

After months of aggravation, misinformation, and tests, Matt learned that he had lesions on his brain, likely there since birth. One of them, a germinoma tumor on his pituitary gland, was treatable with chemotherapy. A second tumor, a teratoma referred to as a ‘sticky tumor’ at the back of his brain, was more sinister and required extensive surgery.

Brain surgery was long and grueling. The sticky tumour was a brute – bleeding extensively and clinging tenaciously. Matt needed three blood transfusions during the surgery and afterwards he needed to learn how to walk again. Then came multiple rounds of radiation to destroy the sticky parts still hanging on.

Matt’s parents left their home and jobs in Medicine Hat and took up residence in Matt’s university suite – occupying his room in the condo he shared with three other roommates. Their sole purpose was to care for their son. They were unwavering in their support.

During treatment Matt had what he calls a defining moment; a nudge to redirect his life. Driven by newly discovered empathy, he decided to become a nurse and play a meaningful role in

helping people. As soon as he was able, he reenrolled in university and switched faculties. He completed his registered nursing degree and has never looked back.

It’s been seven years since his harrowing ordeal of brain surgery, and awakened Matt is in a place of calm resolve. He is in remission, in a career he loves, in a life he cherishes, on a path he is choosing. Matt still loves hiking and climbing, only now he is less driven to reach the highest peaks, and more apt to reach for the moment. And as for kayaking – absolutely – Matt still loves being on the water. Only now, it’s not the pitch of the race that moves him, but the soulful call of the loon. 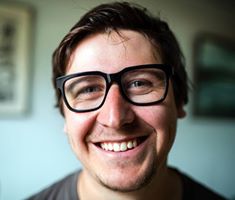 Matt Frank is thirsty for grace.

After he recovered from treatment and surgery, Matt found friendship and camaraderie at Wellspring Calgary. He signed up for several Young Adult programs and found fun and meaningful connections there. “Boot Camp is amazing and some of my best laughs are at the Games Night,” he said. “Those are some of the most awesome people I have ever met,” he said of the facilitators and other YA members.

BACK TO ALL MEMBER STORIES
Marloes Presti